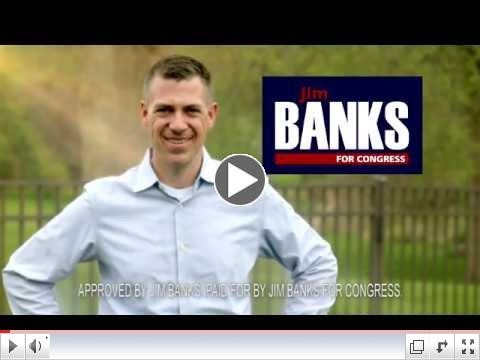 State Senator Jim Banks is now running for Congress in Indiana's Third District. Senator Banks has been a champion of food freedom during his tenure in the Indiana legislature and deserves your support. He has been a strong ally for local food producers and has had several successes in increasing economic opportunity and reducing the regulatory burden for small farms in Indiana.

He was the lead sponsor for legislation passing into law the greatly increased the number of poultry that producers can slaughter and process on the farm. The poultry bill also eliminated regulation from county health departments over poultry, rabbit and egg sales direct to the consumer. In the prior legislative session, Senator Banks was the lead sponsor in a successful effort to legalize on-farm slaughter and processing of rabbits. He was also able to convince the Indiana Board of Animal Health to amend regulation on wild pigs that was similar to the Michigan swine Invasive Species Order so that heritage breed hog farmers were no longer a potential target of the law. Senator Banks has been a sponsor of a food freedom bill introduced in the legislature and has worked on legalizing the sale and distribution of raw milk.

You can contribute to his campaign by donating online or mailing a check/money order to:

How did you hear about Seven Sons Farms?